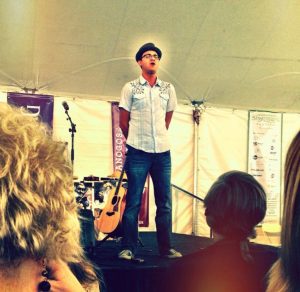 Getting to Know Josh Goforth

From his Appalachian Mountain accent to his incredible talents on pretty much all the instruments, Josh Goforth is one of those storytellers you really need to hear in order to believe. With stories filled with the most original characters alive (he swears they all exist) and songs that will have you clapping and singing along, you can’t help be enchanted and transported to his boyhood upbringing in the Appalachian Mountains.

I remember the ghost stories my grandmother told.  Her accent was slow and haunting and as a kid, it scared me to death.  But I’m thankful now to have heard those stories.  The suspense she created taught me quite a bit about pacing.  It’s hard to pick a first one, people in my community were constantly telling stories.

2. How was the seed of storytelling planted in your life?

Storytelling was a way of life where I grew up.  I remember sitting for hours in the evening and hearing family stories from my grandparents.  There were so many interesting characters in the community that the stories seemed endless.

Storytelling has much to teach all of us.  In a world of quick media and instant entertainment, our stories show us the beauty of a slow unfolding and help us reach a deeper understanding of our emotions and our shared humanity.

4.If you needed to start a dance party, what song would you lead with?

Tough call, the song in my head right now is signed sealed delivered…Stevie Wonder.  I know, you thought it was gonna be some fiddle tune.  Haha

Don’t miss Josh during the festival. Find his schedule and information about the festival at https://timpfest.org/events/28th-annual-timpanogos-storytelling-festival/

There is an old saying that goes something like “Never judge a person until you have walked a mile in their shoes.”  Wise words, indeed.  Why is that true?  Is there a story behind where those shoes have been?  Does knowing that story make a difference?  Perhaps more importantly, where will those shoes go next?

On a lighter note, you can learn a lot about a person by the shoes they wear.

When I was in high school, I had a crush on my senior year English teacher, Mr. Curtis.  He didn’t stand up front and lecture to us.  Instead, he would sit on one of those plastic, bright-colored classroom chairs – you know, with the mini table attached to it.  He sat all hour in a circle with the rest of us.  He used to lead us in fascinating discussions about literature and the world from whence those words came.  He taught me many things.  He was kind, fun, and creative.  He wore black Converse shoes to school.  Every.  Day.

Also, when I was in high school, I had a crush on my senior year boyfriend, Ben.  (Much more appropriate, don’t you think?)  We used to go to our favorite place, St. Edwards State Park.  We would hike down to the lake and find a spot to sit beneath the great evergreen trees and listen to the water lap against the shore.  We sat together and read stories and poetry to each other.  We would dream about our lives after graduation and the adventures that were waiting for us.  We talked about many things.  Most of all, he was kind, fun, and creative.  He also wore black Converse shoes.  Every.  Day.

Fast forward 15 years or so, and guess who I still think of when I see black Converse shoes?  Mr. Curtis and Ben, of course, two of the most kind, fun, and creative people I have known.

Last week, when I first saw Josh Goforth play his fiddle at the Timpanogos Storytelling Festival, it didn’t take long for me to notice his shoes, as he sat up on the stage, stompin’ his feet to the rhythm.  You guessed it – he was wearing black Converse shoes.  Through words and music he led us on some adventures back to his home in North Carolina and inside his heart.  I had a chance to speak with him a few times, and I realized he too is kind, fun, and creative.

It all sort of comes together, doesn’t it?  It’s no wonder I get a good, warm feeling when I see Converse shoes.

What do you think of when you see Converse shoes?  What about your shoes?  Is there a story behind where those shoes have been?

MINI QUIZ:  Who else came to the Festival wearing black Converse shoes?  Do you know?  Can you guess?