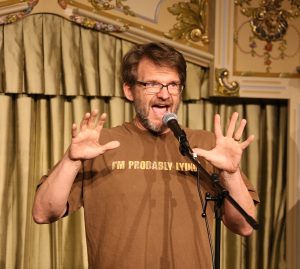 He was a lawyer, and he was my friend, but I knew he was lying.

Talking about a lawyer lying is almost cliche. However, the last few years, I’ve spent way more time than I would like sitting in a court room full of lawyers. And fortunately, in all of those interactions, I don’t think any of them lied, or even skirted the truth.

But, sitting in a the Orem Public Library last night, I knew that Dale Boam was lying. He wasn’t even trying to hide it. In fact, he was being somewhat brazen about it.

In fairness, the five people who spoke before Dale were also liars. They just weren’t as good at it as Dale. Of course, none of them were lawyers either. At the end of the evening, we all agreed that Dale was the biggest liar. We even gave him an award for it: Utah’s Biggest Liar.

Every spring as we shake off the winter, I look forward to the Utah’s Biggest Liar competition. I was reminded that the competition has been going on for 9 years and I’ve been involved for seven of them. I’ve missed a competition here or there due to work, but I put this on the calendar early and look forward to it all year. I’ve been the MC, but the last few years, I’ve been a judge. 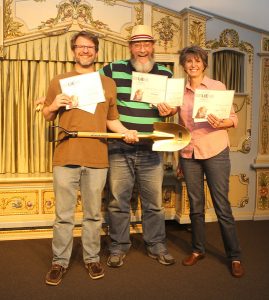 Next year, I’ll put my money where my mouth is and actually compete. This isn’t some annual angst-post of “Maybe, next year. . .” I’ve been content to sit and enjoy the stories. (Although the judging is horrifically difficult because the winners are so good, it’s hard to pick one.)

So, I’m officially declaring myself in the race for Utah’s Biggest Liar. (If I win, maybe I’ll apply to law school.)

Tonight is our annual Liar’s Competition, held at the Orem Public Library and it’s free to the public. The youth competition begins at 6:00 pm and the adult competition starts at 7:00 pm. If you’ve never been to one, you really ought to check it out. They are really entertaining. Our guest blogger, Rodney Bliss is a former MC tells you what to expect.

April 1st is a day for pranks and gags. It’s also the time of year that brings out the liars. I had the opportunity on Monday night to be the emcee for Utah’s Biggest Liars competition. It’s part of the world famous Timpanogos Storytelling Festival. (I know that Monday was actually March 31, but scheduling impacts our little event.)

The Liar’s Contest celebrates the tall tales. We heard from eight adult liars. . .although they are referred to as “tellers” in storytelling vernacular.

I’ve been involved with this competition for the past 3 years. It’s one of my favorite events of the year. You might think it would be simple to tell a lie, but to win a competition like this you need to understand the format and also be entertaining. The tellers are judged on 5 criteria.

Technique: How well did the teller use the stage and mic, voice inflection, body language?

Story Development: It has to actually be a lie. The best tellers start with something completely ordinary and take you quickly into the realm of the absurd.

Originality: It has to be an original story

Effectiveness: How well did the crowd respond?

Time Limit: They have to do all of that in 6 minutes or less.

The winning story, told by George McEwan started with him flying a plane from Salt Lake to Idaho. He soon hit a thermal and got stuck. Then, while sitting on the wing eating his lunch, a flock of eagles show up and manage to spin his plane so hard his milk turns to butter. Then, the seagulls show up and after that it gets weird.

We also have a youth competition. This year, our youngest teller was 5 years old. I’m not sure I could talk when I was five. She won the Crowd favorite award. Our oldest youth teller was 13.

In addition to a cool t-shirt, winners get a family pass to the Timpanogos Storytelling Festival in August, and a certificate. The winner gets bragging rights and a golden shovel. We never really explained why we give the biggest liar a shovel.

There’s no real business tie in for this post. I suppose I should remind you that lying at work is a really bad idea. However, lying in public can sometimes win you fame and a golden shovel.

Rodney M Bliss is an author, columnist and IT Consultant. He lives in Pleasant Grove, UT with his lovely wife and thirteen children.