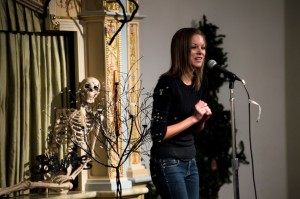 Hauntings – What can we learn from a good scary story?

Can you think of the first really scary story that you heard? Perhaps it was a ghost story at a sleepover, or an urban legend around a campfire. Do you remember how you felt? If you are like me, you probably felt fear and excitement simultaneously. What is it that draws us to these stories? Is it just the adrenaline rush, or is there something we can learn about ourselves in these dark corners?

Tonight is the Timpanogos Storytelling Festival’s Hauntings Storytelling Competition and I can’t think of a better way to treat yourself this Halloween than with some spine-tingling stories. Forget those gory slasher movies, give me a good old-fashioned cerebral scare any day.

Here are a few things that we can learn from a good scary story:

1. Dragons do exist, but they can be defeated. This applies to monsters, demons as well. If we have the courage to find their weaknesses, we can prevail.

2. Stories can be scary but predictable, which life rarely is. Like a roller-coaster ride, there is anticipation, drama, a predictable climax and then the satisfying conclusion. For the adrenaline junkie, it is a safe thrill.

3. Often, scary folklore is created by cultures to warn people against bad behavior. Think of the ghost stories in which someone returns from the dead to settle unfinished business because they did something wrong in life or someone did something to them. Think of the scary fairytales warning children to stay away from strangers or not to go into the woods alone. When these stories were originally published children were often facing very real and perilous dangers every day. There are real dangers today that we must be on the watch for.


4. We can gain a sense of control over our own demons and monsters when we take the time to stare them down.

5. We stumble into closeness when sharing a good scare with someone else. The shared screams, gasps, and nervous laughter cause us to cling to one another and remind us that we really aren’t alone.

Contemporary myths, urban legends, ghost stories, folklore and fairytales can not only provide us with entertainment but with insight as well. A good scary story will take you to dark places in order to enlighten you. Whatever it is that draws you in, surrender yourself and come to the Haunting’s Storytelling Competition on Monday at 7 pm at the Orem Library. It’s free, it’s frightening,  it’s fun and you might just learn something about yourself. 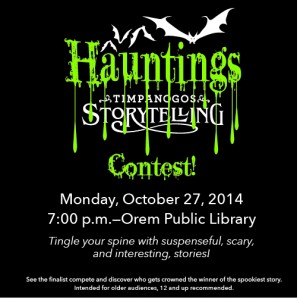 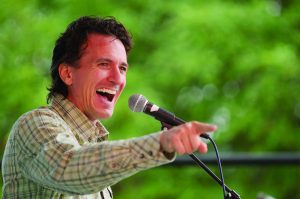 At the invitation of the  Timpanogos Storytelling Institute Antonio Sacre will be performing a live concert on Monday, October 13 at 7:00 pm at the Orem Public Library.

He recently performed at the National Storytelling Festival in Jonesborough, and I am a big fan. He is dynamic, energetic, honest and funny.  He weaves English and Spanish into an intriguing tapestry that perfectly showcases the traditional and personal tales he tells.

If you want to hear a multitalented storyteller, author and solo performance artist who has graced the stage of the Kennedy Center, then don’t miss this opportunity.

Can I just brag a little? Antonio tweeted this recently and now I’m his 9,000th follower. He even sent me a tweet in response. Jealous? You should be. It won’t be long before he is trending. 🙂

Who will be follower 9,000? I’m HUGE on Twitter. Am I trending? Let me check…nope. Not trending. Sigh.

A First-Timer’s Trip to the National Storytelling Festival

Flying into the Tri Cities Regional Airport, we could see the beauty of the Appalachian mountains below and it was apparent from the get-go that we were going to be in for a treat. Luckily, or perhaps serendipitously, we were sitting next to a former board member of the National Storytelling Festival from Maine, who introduced us to the founder of the festival and former president of the International Storytelling Center, Jimmy Neil Smith. His Tennessee lilt would be one of the first voices to greet us, what a fitting way to begin our new adventure. 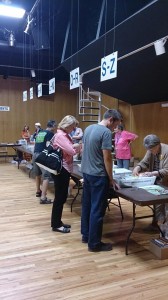 The drive from the airport takes you through some beautiful countryside with undulating hills carpeted with trees and fields for grazing. We headed for the nearby town of Kingsport because the hotels near the festival fill up quickly and are more expensive. After checking in, we drove into Jonesborough to pick up our festival tickets and get acquainted with the layout of the town.

As we walked into the historic district the first word that came to my mind was “charming” and that word doesn’t come to mind very often. The red brick Washington County courthouse with white columns and a clock tower dominates the historic main street which is lined by quaint antique shops, a general store and the Lollipop Shop, among others. If it weren’t for all the white tents you might think you had stepped back in time a few hundred years, which is fitting for a town that is said to be the oldest town in Tennessee and the birthplace of Andrew Jackson, country music, and of course, the storytelling revival. 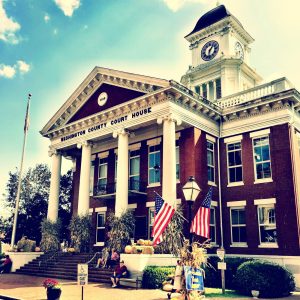 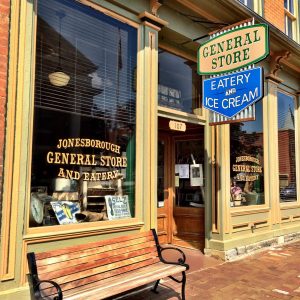 We ate dinner at the Tupelo Honey Cafe in Johnson City and I just had to try Brian’s Shrimp and Grits, the “Shoo Mercy” version with goat cheese grits, caramelized onions, mushrooms, and spinach drizzled with a spicy roasted red pepper sauce. Shoo mercy it was a big plate of food!  Okay, since the suthern vocabulary has crept in let me tell you that we were really enjoying the sweet twangs and drawls that surrounded us. No two accents are the same, although all are wonderfully tempting to try. I did resist the urge, though, because I was afeared that y’all would confuse my admiration with ridicule, and I do admire a beautiful southern lilt. 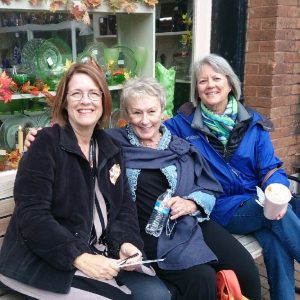 The next day was rainy and cold and we arrived early at the tents all bundled up to settle in and claim our spots. Our group decided to divide and conquer, sharing the highlights afterward, so I began by listening to Sue O’Halloran tell passionate stories about the racial tensions on the Southeast side of Chicago in the 1950s, which was a moving way to begin my adventure. This was followed by Tim Lowry sharing his hilarious experiences as an imaginative child in Kentucky, “a place that rains sweet tea.”  Tim will be coming to our festival in 2015 so I was happy to get an early introduction to his down home, boy-next-door style. Don’t tell him this, but his goatee and bow tie remind me of a young Colonel Sanders. Let me know if you agree when you see him next September.

The rest of the festival was filled with laughter, reflection, poetic language, music, and insights. I saw some of our old favorites such as Carmen Deedy (back in full form), Bill Harley, Donald Davis and Bil Lepp. I also found some new favorites in Daniel Morden, 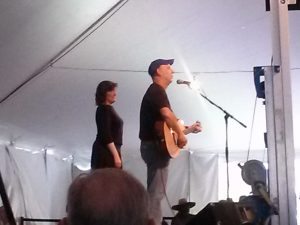 Linda Gorham, Will Hornyak, and Tom Lee. Dovie Thomason and Tim Tingle reminded us of the wisdom of our native American culture. Kuniko used the beauty of the Japanese language and the art of origami to teach us that anger is the gate of hell and contrition is the gate of heaven. Regi Carpenter pulled back the curtain on the stigma of mental health issues. Carol Birch brought the literary genius of John Steinbeck to the stage and she joined Megan Wells along with Jim May to bring Ray Bradbury to life.

Music could be heard throughout the tents. Nashville singer and storyteller, Kate Campbell made us laugh with her quirky characters, and Healing Force’s harmonies reminded us that beauty is as beauty does and it can never be concealed. 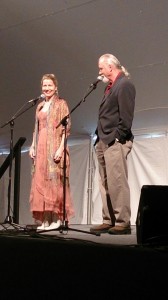 I’m not a crier (at least, I keep telling myself that), but a new voice, Pete Griffin made me cry with his touching story of fishing for salmon in Alaska with his mother-in-law, as did Kevin Kling, with every story that he told.

Occasionally, performances were interrupted briefly by passing Norfolk Southern Railway trains, whose tracks are within feet of two of the tents. The tellers would often weave the interruption into the fabric of their stories with a twinkle in their eyes. I also noticed that the audience in Jonesborough is very generous with the tellers and participated eagerly and joyfully, whether it is chiming in on a refrain or playfully repeating phrases. The tellers fed off of this generosity and brought their “A” game.

Here are some of my favorite quotes, overheard at the festival:

“I was nine years old when I met the stars.”  – Megan Wells

“Nobody looks better than when they are helping someone else.”  – Kevin Kling

“From here on everything that happened was my brother’s fault.”  – Donald Davis

“Greed is a hunger that starts in your belly, but if left unchecked it will twist its way into your heart.”  – Carol Birch

“Respect is the other hand of love.”  – Dovie Thomason

“West Virginia is the oldest and sickest state in the union, which gives a whole new meaning to ‘almost heaven.’”   – Bil Lepp

“God made the earth round so we can’t see too far down the road.”  – Carmen Deedy quoting Danish author Isak Dinesen.

“The precipice of a putrid paradise.”   – Regi Carpenter describing the dump she would visit with her father as a child.

“The first rule of writing – butt in chair.”   – Bill Harley

“The most sophisticated technology you can invest in is a human being.”  – David Novak

“A great gift is an answer waiting for a question.” – Kevin Kling 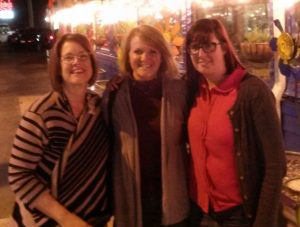 We ended the weekend at Cootie Brown’s Cafe reflecting on our favorite moments and tellers, all of us happy and filled. You never know what the future holds, but I hope that it will include another trip to the festival. If not, I’m grateful that I had the opportunity and that I can see many of these great storytellers and musicians closer to home at our own Timpanogos Storytelling Festival. Until then, I will ruminate on the truths that I heard (thanks David Novak for reminding me of such a delicious word) and savor the sweetness of the stories that were stirred in the deepest part of my memories. Thank you to all of the volunteers in Jonesborough who made the 42nd annual festival possible. I hope to see all y’all soon. 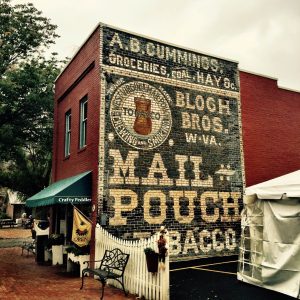 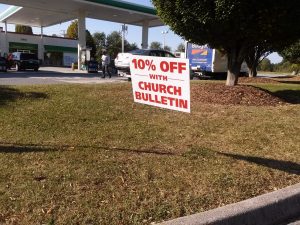