To see Kevin Kling perform once is to love him for a lifetime. Kevin is perhaps best known for his commentaries on NPR’s All Things Considered as well as storytelling events around the globe—he is a favorite at the Timpanogos Storytelling Festival—but is also an accomplished author and playwright. Growing up in the Minneapolis suburbs of Brooklyn Park and Maple Grove provided fertile ground for a special blend of autobiographical stories rooted in the unique culture of Minnesota (If you have heard Kevin tell his stories, you had better be pronouncing that with the proper Minnesotan accent). But Kevin can just a quickly take you on a whirlwind tour through the Mediterranean and Texas. Whether you are in need of a powerful story that touches the heart or a bit of humor that splits that side, Kevin is the storyteller for you. Kevin recently agreed to answer a few questions for us to help us get to know him just a little bit better.

1.What book are you currently reading?

Six Memos for the Next Millennium

2a. What is the first story you remember hearing?

My dad would just make up stories, if it was called ‘Goldilocks and the Three Bears’, there would probably be no Bears and as good a chance Snow White would be in it as Goldilocks. I took a little from each style.

2b. What is the first story you remember telling?

As an adult ‘Lightning’

3. How was the seed of storytelling planted in your life?

My grandmother. She would visit me in Shiners hospital when I was three years old and bring stories from home. The power and need of a story was planted.

I ask that question every day and everyday get a new answer.

I think society should influence stories, we need to be responsive to our communities. Stories are at different times medicine, a meal, a desert, a tonic … what is needed at the tip top of “once upon a time…” Whether we influence or not can be argued all day. We can hold up a mirror, a roadmap or a recipe and hope folks take it from there.

5. If you needed to start a dance party, what song would you lead with?

Burning down the House…

Don’t miss Kevin at our special free storytelling performance during this year’s Orem Summerfest on Monday, June 5th at 7 pm. The event will be held at The Orchard at University Place, the large outdoor gathering space to the north of H&M. The stage will be located in front of a large grass park. Attendees are encouraged to bring a blanket or chairs.

To honor the Timpanogos Storytelling Festival’s move to their new home at the Ashton Gardens at Thanksgiving Point, this year’s festival’s theme is Stories Grow Everywhere. The new theme caught my fancy and I decided between now and the festival in September, to put this theory to the test. I’m going to look for stories wherever I go and see if I really do find them growing everywhere.

Before the week was over and before I even had a chance to start looking, a whole boat load of stories found me. I was telling stories at an elementary school in Provo this week, when I reconnected with a teacher there that I hadn’t seen for 8 years. I had originally met Yvonne Baraketse when I was a student at UVU and we were in a theatre/dance production together. Yvonne has since formed a performing group called Ngoma y’Africa Cultural Center and she asked if I would help with their upcoming performance.

Many of the members of Ngoma y’Africa came to the United States as refugees from various African countries and were pushed out of their homes by war, natural disasters and other atrocities. The show tells the story of their refugee experiences through music and dance. So as I’ve been trying to help them develop the narrative element of the show, I have heard many stories—I will share one.

At the end of rehearsal Friday night, I watched a single female dancer named Cheryl Neufville rehearse a solo number. I was mesmerized. It’s impossible to relate how beautiful and evocative the dance was—powerful and mournful at the same time. When she was done, I asked her about the dance. Cheryl had studied dance at the University of Utah and created the dance in honor of her grandma.

Cheryl’s family is originally from Liberia. She said her grandma was tall with long beautiful hair. She had a silent power about her—although she was quiet, her presence was strong and she taught her daughters and granddaughters to be strong and proud of who they were.

In 1989, Cheryl’s parents came to the U.S. for a wedding, leaving their two daughters with their grandma. While at the weddi 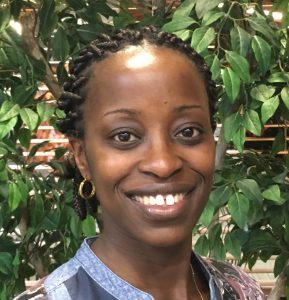 ng, war broke out and they could not get back home. Meanwhile, two rebels came to the Grandma’s house demanding her home. After hiding the two young girls, Cheryl’s grandma refused. She was not that concerned about material things, but her modest home represented their family traditions and identity. She took a stand against the rebels and what they stood for.

The two men dragged her into the street and killed her. The stories of her Grandma and the things she lived and died for still shape her family—a family that is still separated, but this summer, after 28 years, they hope to finally be reunited.

It has been a honor to hear these stories from the incredible members of Ngoma y’Africa and I’m excited to see what stories I find growing next.