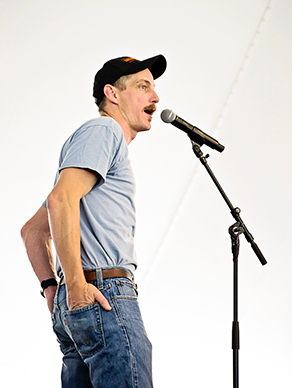 Getting to Know Bil Lepp

Bil Lepp is a very candid and soothing storyteller with a desire to instill in all of his listeners the virtues of obedience and honesty. Okay, that wasn’t all true. Bil is a world-renowned liar and a favorite of the Timpanogos Storytelling Festival and my family. He has captured the minds of kids both young and old with his tall tales inspired by his colorful life. I’ve grown up hearing about Buck, Skeeter and Bil’s adventures in West Virginia and practically run to his tent every year he comes to hear more. We are always happy to have him, and hope that our listeners old and new have the chance to visit Bil’s West Virginia.

My dad told me messed up fairy tales when I was kid, like Goldie Lox and the Three Pigs.  I was the last of five kids, so I think he was bored with the traditional versions, so he mixed them up for his own pleasure.

I got my start first watching, then participating in the West Virginia Liars’ Contest.

Hopefully storytelling will continue to grow.  It’s a great live event, so I hope more festivals grow, and that more people outside of the storytelling world find their way in.  I like doing events at places where folks haven’t ever heard a professional teller so they can find out that it is out there, and that it is a solid, family friendly form of entertainment.

For more on Bil’s schedule at this year’s Festival, visit: https://timpfest.org/events/28th-annual-timpanogos-storytelling-festival

Bil Lepp is an amazing storyteller and an even better liar. I have listened to his stories for years, and every single time, he hooks me right from the very beginning. He gets on stage wearing blue jeans, a tucked-in t-shirt, and a ball cap. He’s an average all-American guy that looks like your brother or your next-door neighbor. He puts his hands in his pockets and just starts telling you about something that happened when he was young. Within the first few minutes of one of his stories, I will think to myself, “Well, this is believable. Maybe he’s actually telling a true story this time.” And then, a few more minutes into it, when he tells about he and his friend Skeeter dressing up in their homemade deer costumes during the deer hunt season, you quickly realize he’s tricked you again. And at that point, the lies become more and more outrageous by the minute, and you will find yourself laughing harder than you ever remember laughing.

I would be surprised if there were three people in this world who know Bil Lepp better than my children. They have grown up with him, whether it was listening to him in the shaded tents at the Timpanogos Storytelling Festival, reading his books as a family, or falling asleep to his recordings. Here’s what they have to say about Bil’s storytelling:

Janessa (17) “Saying that Bil Lepp’s stories are dull and unimaginative would be a big, fat lie… As are most of his stories.”

Harrison (14) “Storytelling is one thing. Sucking the audience into hilarious stories, true or false, and making them roll on the floor laughing like crazy is quite another. That’s the kind of storyteller Bil Lepp is.”

Nathan (11) “I like Bil Lepp for sharing his ingenious ideas, like JELL-O balloons, and teaching us new ways to use the library.”

If you haven’t ever heard Bil Lepp tell his tall tales, the Timpanogos Storytelling Festival is the best place to see him in action. Our listeners adore him, and he always brings his newest and best stories to share with our audiences, which consist of fans that range from young to old. Make sure you arrive at his tent early because most of his hours are standing room only!