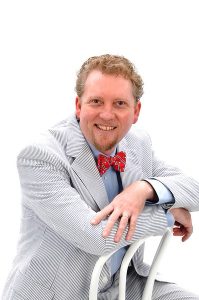 I have had the pleasure of listening to Tim Lowry tell stories on three occasions and yet I still sit here trying to figure out what to say about him. I could tell you that he reminds me a bit of a young Donald Davis—and not just because he has been known to wear a bowtie. But, no, it is definitely more than that!

I’ve heard Tim tell stories about family or school that had me laughing so hard that the risk of falling out of my chair was real and then, just a moment later, I was deeply touched by their love and compassion.

I’ve seen him dress in character to tell the story of a Southern gentleman—don’t run away if this is not your thing, it’s not usually my thing either. But he was so charming and full of interesting details that I was sad when the hour was up.

I’ve heard him tell a story in Gullah (also called Sea Island Creole English) that was not only a marvel of tongue twisting to behold but also warmly brought me into the fold of another culture.

I’ve even heard him tell the story using only a kazoo—it was brilliant!

Still, all that somehow falls short of what I want to express about how much entertainment and joy you are in for when you hear Tim Lowry at the Timpanogos Storytelling Festival. I guess mostly I just want to tell you that you must go see him and that when you do you are going to love him—I promise! (this promise holds no monetary value :))

And now for a few words from Tim himself:

1. At TimpFest we are very family oriented, will you tell us a little about your family?

My wife Bonnie and I have been married for 18 years and we have two adopted daughters—Libby is six years old and Bethany is 4 years old.  We attend church services regularly where Bonnie sings in the choir and I teach children’s Sunday school.  We love to read books!  Currently, the girls’ favorite is “Abiyoyo.”  A couple night’s ago we were treated to a shadow puppet play of this story.  It was very exciting, especially when the giant Abiyoyo ate a frog!  We also love gardening.  This has been a great year for tomatoes.  We just planted pumpkins and are hoping for a whopper!  When weather drives us indoors from the garden, we love to dance to old fox trot records on our 1911 Victrola.

2. If you weren’t a professional storyteller, what would you be doing instead?

I’ve always said that when I retire from storytelling I want to be the chaplain for Ringling Brothers, Barnum and Bailey Circus.  I would love to be the spiritual advisor for the Greatest Show on Earth.  Ringling was my first introduction to show business and I still LOVE the circus.  What a great metaphor for life—the highwire (life is all about balance), the lion tamer (life is dangerous, best to know that going in), the acrobats (strength is good, but grace is even better), and clowns (Smile!  Count it all joy, and smile!).

3. Do you get nervous when you tell stories on stage? If so, what do you do to overcome your fear? If not, what is the key to your fearlessness?

Nervous?  No.  Although, I wouldn’t describe myself as fearless (see above comment about lion tamer).  What’s the key?  Knowing that the audience is human and they are cheering for you.  They know you are human and they want you to do well.  Be human, be honest, be real and the audience will respond to that.  It’s like watching the ice skaters at the Olympics.  We cheer for the USA to win, but we all groan when a Russian skater falls.  Russians are humans too and we feel their pain.  (Of course, we will still deduct a couple points, but nonetheless . . . )

4. What is the most embarrassing thing that you have done or has happened to you on stage?

Hmm, most embarrassing?  Years ago, when I was a student in a high-stakes storytelling competition, I got tongue-tied and said “fart” in the middle of a sentence.  I was purple with embarrassment.  Even the judge laughed (and judges never laugh, unless a Russian falls down.  Judges are not human.)

5. The BYU football team will be playing Nebraska the Saturday of the Festival. Who is your pick to win? (This is a “know your audience” moment.)

Ah, football!  Southerners go to football games and funerals with equal enthusiasm.  We do our best to kill each other at the former, and are polite enough to apologize for having done so at the latter.  My condolences to Nebraska.

And one bonus question—because we couldn’t have a Southern gentleman come to our Festival without asking for a bit of Southern advice!

Give us your favorite piece of Southern advice.

Well, I recently was advising a “cumyeh.”  (A cumyeh is a person who has just come here, as opposed to someone like me who has always been here.  I am a “benyeh.”)  This person, who shall remain nameless but they were from off, spotted an alligator in the river and wished they had something to feed it.  I reminded them, “NEVUH feed a GATUH!”  (That’s not in the Bible, but it should be.)