5 Questions for Jim May 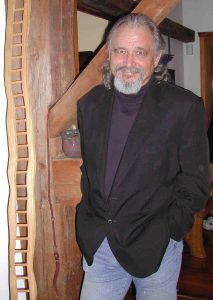 If you go to this year’s festival looking for a seasoned storyteller with a rich, resonant voice who focuses on family, then Jim May is your man. I became a fan of Jim when I saw him perform with Megan Wells at the National Storytelling Festival. The story was called “Lime Vanilla Ice” from Ray Bradbury’s book Dandelion Wine and it was a wonderful performance that ended with a standing ovation. I think you are going to find his style comfortable and engaging. We asked him a few questions to help you get to know him.

1. At TimpFest we are very family oriented, will you tell us a little about your family?

Virtually everything I do is rooted in family. I come from a large farming family that has roots in the same small Illinois town of Spring Grove, Illinois, since the 1840’s. My wife, Nan, and I live about twenty minutes from there now and our grandchildren live in the Spring Grove School district as well.  I was founding artistic director of the Illinois Storytelling Festival for twenty years. We held the festival in the Spring Grove village park behind my mom’s house. My cousin was our business manager.

I tell stories about my family (especially my granddaughters), and many family members and elders told at our festival at a venue called the “Elder’s Tent,” or “Traditions Tent”—where we featured “kitchen table,” type storytelling—stories told by ordinary folks who had led interesting lives. To this day I don’t think there is a similar stage at any festival in America. Our festival, though it drew 2000-3000 each year is no more. There are several elders circles that meet monthly for people to share their life stories still functioning as one legacy of our festival. The other is our organization, Illinois Storytelling, Inc which sponsors smaller events all over the Chicago land area. I’m best known on the festival circuit for my family stories. One of them, “A Bell For Shorty,” which is a tribute to my father who farmed his whole life, won an EMMY award on Chicago Public Television and is the last story in my book of family stories (THE FARM ON NIPPERSINK CREEK), which won a Public Library Association “Best Book” award.

I’m best known in Chicago land for my presentations to children and families. I am a former elementary school teacher and community college counselor; In my 35yrs of visiting schools and doing family reading nights, literacy nights, etc, I estimate that I have told stories live to about one million children and their families, not including radio and tv appearances. A teacher once referred to my as “a professional grandfather.” I can’t think of a better job title.

I lead an annual workshop to Oaxaca, Mexico every year. We work on stories in the morning and do cultural tours in the afternoon in Oaxaca, a Spanish Colonial city (UNESCO Heritage Site) that the New York Times calls: “The folk art capital of Mexico.” One of the things I do in my workshop/retreat is encourage my adult students to write “legacy letters” to their grandchildren.

I love telling to families and am thrilled that I hear the Timp audience is multi-generational! Congratulations!

2. If you weren’t a professional storyteller, what would you be doing instead?

A teacher. No question. I consider my self a teacher though I left my teaching/counseling job to go full time as a storyteller in 1986.

3. Do you get nervous when you tell stories on stage? If so, what do you do to overcome your fear? If not, what is the key to your fearlessness?

4. What is the most embarrassing thing that you have done or has happened to you on stage?

I guess it was the Heath Candy Bar festival in Heath, Illinois where I led off first thing in the early morning and there was no one in the audience. I thought—if Miss Indiana (who went on before me) could sing the Star Spangled Banner to “no one” then I should be able to tell a story to “no one”—but singing to yourself is easier than telling a story to yourself (Only storytellers tell themselves stories in the shower).

5. The BYU football team will be playing Nebraska the Saturday of the Festival. Who is your pick to win? (This is a “know your audience” moment.)

This is a split since I am a Big Ten fan and Nebraska is in the Big Ten. But, Jim McMahon took the Chicago Bears to the Super Bowl championship in 1985 and was a star at BYU so I WILL CALL THIS A DRAW.