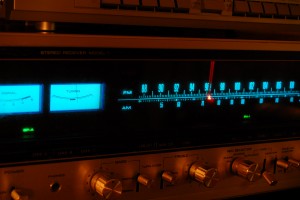 While face-to-face storytelling is the ideal,  most of us can’t attend storytelling festivals or sit around a campfire each weekend so we have to get our fill through other mediums such as radio, which is still one of the best places to find great oral storytelling.

Think about Orson Welles’ notorius “War of the Worlds”, which I recently found out was broadcast the same week my father was born. This historic broadcast, and the public’s reaction to it, demonstrated what a perfect medium radio can be to show the power of the human imagination.  Lou Orfanlla explains, “Radio has the power to individualize its presentation within the mind of each and every listener. There is an intimacy and shared vision that it creates.”

Radio dramas of the ’30s, ’40s and ’50s are the roots of today’s TV comedy, drama, adventure, mystery, and science fiction. Did you know that serialized dramas began on the radio as 15 minute segments that were sponsored by soap companies. They eventually became known as “soap operas”. In the heyday of radio these soap operas could be heard between variety shows with a wide range of genres. Today’s TV shows are descended from great radio programs such as Saturday Night Theater, the CBS Radio Mystery Theater, and Laurel and Hardy.

While TV, movies and Youtube videos have become the go-to for many when they want to hear a story,  the power of radio that makes this medium a great option. There has been a resurgence of storytelling on the radio, which has moved away from the serialized story and is more often formatted around a weekly theme with autobiographical stories. The Moth Radio Hour is a popular program which highlights true stories told by seasoned and novice storytellers alike. The Moth Radio Hour a broadcast based in NYC and can be heard in the Salt Lake area on KCPW on Saturdays at 11:00 am – 12 noon.

Storytelling has become somewhat of a movement in NYC and around the country. Other radio shows that use a similar format of true stories told by everyday people are Snap Judgement (storytelling with a beat), Risk (true tales, boldly told) , True Story (a night of true tales told to friends), StoryCorps (one of the largest oral history projects of its kind), and a favorite mentioned in an earlier blog post, This American Life. All of these have archived podcasts which can be found on their websites.

While true stories told by everyday people have really gained a following, there is something to be said about the art of the traditional tale skillfully told by professional storytellers. One weekly radio broadcast that really celebrates this ancient art is The Apple Seed on BYU Radio.

On The Apple Seed you’ll hear everything from traditional fairytales, to interviews with storytellers, Jewish tales, scary tales, Southern tales, stories for and about girls, The Odyssey, Lou Gehrig, Grimm, Ray Bradbury and many others. You’re bound to find some of your favorite storytellers on The Apple Seed as well.  The most recent broadcast was from the Four Corners Storytelling Festival which featured Alton Chung, Andy Offut Irwin,The Storycrafters, Dan Keding and Evelyn Roper. And just take a look at some of the past performers that have been featured on The Apple Seed:

What a great resource for teachers, families, and anyone wanting something great to listen to on their lunch break! You can catch The Apple Seed live on air weekdays at noon or go to BYU Radio for the podcast.

So, when you really want to fire up your imagination, turn off the TV and head for the glow of your computer to find a radio program that celebrates the art of storytelling.