The school year is winding down, so we thought we would take a moment to thank all of our hard-working teachers by republishing an article about storytelling in the classroom. Thanks for all of your hard work, dedication, sacrifice, creativity and love.

Tips to enhancing your storytelling in the classroom.

The key to making any lesson go from interesting to memorable is a story. A carefully chosen, well-timed story can help a student understand and remember the lesson, and – more importantly- understand how to apply the lesson to their lives. Researchers have found that a human brain can retain more information if it is given in story form then if it is given through a list of unrelated facts.

The case in point I want to share comes from my own life, but here’s a little warning. Since Halloween is coming up and the Timpanogos Storytelling Institute will soon be holding its Hauntings competition, I feel it’s an appropriate time to share this story.  One day in my high school English class we were reviewing our vocabulary words for the week and our teacher asked us, “What does paranoia mean?” After one student explained the dictionary definition she had written down on her homework page the night before, the teacher then asked, “Now, what does that word really mean?” We were stumped. She explained that a dictionary may give us a definition of a word, but to really understand a word we have to experience it. Then she began to tell us the story of how she came to understand what paranoia really meant. It happened while she was on a trip to the USSR in the late 1970s. The tour bus full of Americans were warned ahead of time that they would be carefully watched by KGB agents while they were in the country and that it was likely that all telephone calls would be monitored as well. They were also told not to keep any valuables in their hotel rooms and to keep an eye out for pickpockets as their US passport was highly prized in the country at that time. Her feeling of paranoia mounted over the days as she would catch a glimpse of someone watching her or she would hear a click on the other end of the phone. One day, while in Moscow, she went into a women’s rest room. As she entered she carefully looked under the stall doors to see if anyone was there. She noticed a pair of shoes in the far stall and decided to use a stall closer to the entrance. Just as she shut her stall door she heard the rest room door open and someone walked in, walked the length of the stalls, and then turned and stopped in front of her door. At about the same time, the door to the other stall opened and she heard a second set of footsteps. Unsure of what to do, she put her back against the door to hold it shut. Just then, something came over the top of the stall door, hitting her head and knocking her to the floor unconscious. When she awoke she found that her purse had been stolen, but thankfully she was unharmed, except for the nasty bump on her head. “And that’s what paranoia is,” she told her mesmerized class. I’ve never forgotten that lesson. The word “paranoia” would’ve been just another vocabulary word if it hadn’t been for her story.

So here are three ideas that you can use to incorporate stories into your curriculum, whether you teach in a school setting, at church, or in your home.

1. Keep it short and focus on how the story relates to the lesson. Don’t meander off in your story and bring in irrelevant sidebars. A concise story is much more likely to make an impact and be remembered than a rambling one.

2. Get your students involved. Have them think of their own stories in relation to the lesson material. It is one thing for a student to have an intellectual understanding of a topic, but when they can have an emotional understanding as well, then you know that the lesson has become theirs. They can use their head and their hearts to understand. For instance, just this morning I was teaching a student about symbols, and I used the example of “instrument in the hands of God.” (Obviously this wasn’t a public school situation.) We got our heads around it by talking about the word “instrument” and all that is associated with it, but to get our hearts wrapped around it I asked him to think of a time when he had been an instrument and what that felt like. I then told him a story about a time I felt like I was an instrument. The story made an impact on him, and he was able to think of an example in his own life.

3. There are ways to incorporate stories into almost every subject matter that you might teach. I have taught English, history, and creative writing, which all naturally lend themselves to stories, but I was able to incorporate stories into my science curriculum as well. Stories can be used as hooks to begin a lesson, but they can also be used to help the students organize information and create mental file folders. A story about the constellation of Orion might begin a unit on astronomy and help a student to file away the facts about the solar system.

Albert Einstein said, “Imagination is more important than knowledge.” Let’s help our students use their imaginations to gain knowledge by incorporating more storytelling into our lessons. 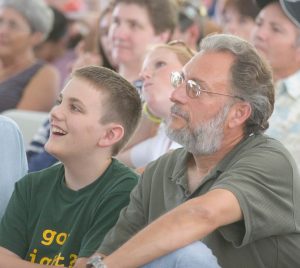 “There’s a lot of difference between listening and hearing.”
― G.K. Chesterton

Real listening is a skill that takes practice. Developing the habit of listening can improve your relationships, your careers, and even your next experience at the Timpanogos Storytelling Festival.

Alan Alda once said, “Listening is being able to be changed by the other person.”

So, how do we practice listening? How do we move beyond simply hearing something? Real listening is about focus and concentration. Eudory Welty, the Pulitzer Prize winning author of The Optimist’s Daughter explains, “Long before I wrote stories, I listened for stories. Listening for them is something more acute than listening to them. I suppose it’s an early form of participation in what goes on. Listening children know stories are there. When their elders sit and begin, children are just waiting and hoping for one to come out, like a mouse from its hole.”

We have a wealth of resources that can help us develop the skill of listening. Here is a list of some of the best that the internet has to offer.

This American Life – This award-winning radio program has one of the most popular podcasts on the internet. There is a theme to each episode and a variety of stories on that theme. Recommended stories- The Super or Switched at Birth.

Serial– A podcast spin-off of This American Life which debuted in October of 2014. Serial tells one story- a true story- over the course of an entire season. The first season is a story about the disappearance of a popular high school senior.

The Moth – “True Stories Told Live.” The live broadcasts originated in New York City but have become popular throughout the country. These are real people telling stories of ordinary life, with extraordinary skill. There is some explicit language in some stories. Recommended story- Fathers.

Story Corps –StoryCorps mission is to collect a vast archive of stories for future generations, to teach the value of listening and that every story matters. Recommended story- Mary Johnson and Oshea Israel, a mother speaking to the young man who murdered her only child.

Snap Judgment – If you love music you might like this new show from NPR which melds music with stories. Recommended story- Mystery Man.

Selected Shorts – This weekly radio broadcast, one of my personal favorites, pairs great literary short stories with fine actors. You can’t go wrong with any of their selections so find the latest free podcast here.

Mercury Theater on the Air – Orson Welles and John Houseman started this radio theater. Their notorious broadcast The War of the Worlds allegedly caused mass panic. Try Three Short Stories: I’m a Fool, The Open Window, and My Little Boy

The Apple Seed – You’ll find many of your favorite tellers from The Timpanogos Storytelling Festival here. This BYU Radio broadcast offers pure contemporary storytelling at its finest. Recommended story- From Sea to Shining Sea.

Wiretap – This unique broadcast comes to us from CBC Radio One. Jonathan Goldstein brings us stories that are comedic, absurd, unexpected, and wholly engaging. It’s unlike anything I have heard before. Recommended story – Help Me, Doctor, Kafka’s Gregor Samsa seeks professional psychiatric help from Dr. Seuss.

CBS Radio Mystery Theater – I loved listening to this as a young girl when my family would take long car trips.I suspect that my dad drove around a few extra blocks as we hung on to hear the door swing shut just after the host,  E.G. Marshall said, “Until next time… pleasant dreams.” Recommended story- Resident Killer.

Radio programs and podcast episodes aren’t the only way to listen to great audio recordings. Your local library has audiobooks available, often for no cost to download. Recommended story- Harry Potter series narrated by Jim Dale, one of the best in the business.

What are your favorite sources for audio stories? Let us know.