Storytelling at a Writer’s Conference

I was fortunate to attend a writing conference here in Utah recently, and while I learned heap of valuable information and ways to improve my own writing, I was excited to see a professional storyteller had been invited to teach a number of classes. Of course, I made it a point to attend them.

The name of the storyteller in question is Julie Barnson, a local of these parts. The first class of hers I attended was all about the process of telling a great story. And it was wonderful. One of the main things she discussed in this class was how to go about learning a story. For me, this was valuable for both telling my own stories as well as incorporating these tactics into my writing to be able to craft more vivid images for my readers.

According to Julie, telling a story is taking a picture in your head and painting it in the listener’s ear. Image by image, scene by scene. If you know the story you want to tell, you more than likely have images in your head associated with that story. Describe them! Make it real.

She also warned against memorizing the entire thing (which I am guilty of doing). Instead, memorizing the first line as well as the last line will help you get going (have you ever stood in front of a crowd and had your mind go blank? Me too. Hence memorizing the beginning to help get your brain in gear) and help your ending retain the power you want it to have. Of course, a few other things such as in-story poems, chants, rhymes, and the like should also be memorized. And that’s it!

Thankfully I don’t have to memorize beginnings and endings when I’m writing (as I can simply scroll back to the top to see what the beginning is), but this is a great tip for oral storytelling.

The second class of Julie’s I attended was her telling Greek myths—ones everyone ought to know but probably don’t. She told the story of Perseus, the story of Orpheus and Eurydice, and the story of the Trojan War. Now, I’ve read these stories before, and had learned them in school, but never had I heard them in such a riveting way as she told them. 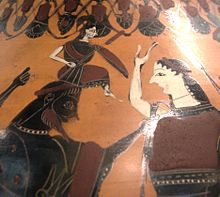 And there is power in knowing these old myths. After all, a lot of our lingo stems from them. For example, when we talk about someone’s Achilles’ heel, we’re referencing a Greek myth. Knowledge is power—especially for storytellers—and as they always said during Saturday morning cartoons in the ’80s, “Knowing is half the battle!”

I encourage you, fair reader, to learn the myths of old, if not to tell then to gain a greater appreciation of the world around you (but let’s be honest, you’ll most likely end up telling these stories to your kids and grandkids as well). I also encourage you to find a story you love and practice telling it. Find the images that encapsulate the story, that invoke powerful emotions, and practice telling that story to your reflection in the mirror, your spouse, your kids or grandkids, and anyone else that will listen.

When doing so, keep this in mind: how do you speak when you’re excited about something? Do you move your hands in grandiose gestures? Do you contort your face when telling scary tales? And what about body language? Hands on hips for petulance, chin up for pride, and other ways help portray the message along with your words. Experiment with facial expressions, hand gestures, and body language to help your story come alive.

So go on. Indulge in the gift that is storytelling.