Three on a String 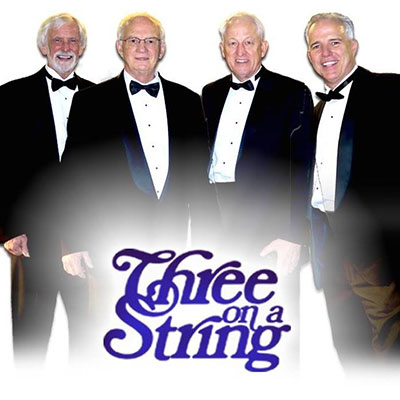 In 2016, Three on a String celebrated 45 years in the entertainment business, a remarkable feat in today’s fast changing society.

Jerry and Bobby performed as a duet for one show at Horse Pens 40 near Steel, AL in 1971. George Pruitt, a big band music veteran suggested they add a bass and thus Three on a String was born. Some personel changes and lots of one-nighters eventually evolved into performances with symphony orchestras in several states including a nine city tour with the Alabama Symphony, opening for Bill Cosby, Red Skelton, Barbara Mandrel, Jeff Foxworthy, George Lindsey, Ray Stevens and many more top stars. Add in concerts for art councils, Chambers of Commerce, Landmark Theatres and city celebrations and you have a busy schedule for these veteran entertainers.

Jerry Ryan left a career as a teacher, coach, and high school principal to pursue the performing dream, as a guitar player, vocalist, and harmonica player and never looked back. “There is no feeling in the world like presenting our show to an audience that has no idea who we are and having the show close with a standing ovation,” Says Jerry.

Bobby Horton started taking trumpet lessons as a child and eventually became proficient at more than 20 instruments including the banjo, dobro, mandolin, guitar, violin/fiddle, and the Irish pipes. He has worked with PBS producer Ken Burns on at least ten documentaries including “The Civil War”, “Lewis and Clark” and “Baseball” and is in constant demand for his musical presentation of Civil War music on the college lecture circuit. But he still finds time to tour with Three on a String.

Brad watched Jerry and Bobby learn their way around the music business before becoming the regular bass player, added fiddle to the shows musical presentation, and eventually developed one of the funniest comedy bits in a collection of winners.

Former member Andy Meginniss fits back in seemlessly after many years adding his unique talents to the already stellar show!

Four entertaining guys who have learned their craft and enjoy sharing their talents with each new audience.