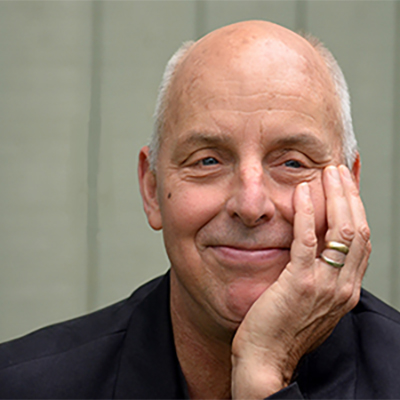 A two-time Grammy award-winning artist, recipient of a Lifetime Achievement Award from the RI Council for the Humanities, Bill uses song and story to paint a vibrant and hilarious picture of growing up, schooling and family life. His work spans the generation gap, reminds us of our common humanity and challenges us to be our very best selves. A prolific author and recording artist, Bill is also a regular commentator for NPR’s “All Things Considered” and featured on PBS. He joined the National Storytelling Network’s Circle of Excellence in 2001 and tours nationwide as an author, performing artist and keynote speaker.
Bill began singing and storytelling in 1975 while still in college. His work has influenced a generation of children, parents, performing artists and educators. Bill’s songs are joyous, direct and honest, his stories are filled with the details of daily life – all told and sung from his slightly off-center point of view.
“Humor is my weapon,” says Harley of his award-winning recordings. A two-time Grammy winner, Bill’s recordings have also garnered numerous other national awards including Parents’ Choice, NAPPA (National Association of Parenting Publication Awards), ALA (American Library Association) and the highest honor from the Oppenheim Toy Portfolio for his concert DVD, “Yes to Running!” filmed in conjunction with Montana PBS.
Bill’s trademark wit and wisdom can also be found in his picture books and novels for children. His first novel, The Amazing Flight of Darius Frobisher was chosen by Bank Street School of Education as one of the best children’s books of the year and his second novel, Night of the Spadefoot Toads was awarded the Green Earth Book Award as best environmental book of the year in the children’s fiction category. His picture books, based on his songs, stories and poems also stand out as ‘pick of the list’ from ABA and a Storytelling Award Winner. Bill is currently working on a new series about 4th grader Charlie Bumpers, first book due out Fall 2013.
Touring nationally in theaters, schools, libraries, festivals and conferences, as a workshop leader, keynote and inspirational speaker, Bill’s work affirms our commonality and reminds us to laugh out loud. In the car, the classroom, at home or on stage, “no one beats Harley for intelligent, polished children’s entertainment – he’s simply the best.” Mothering Magazine