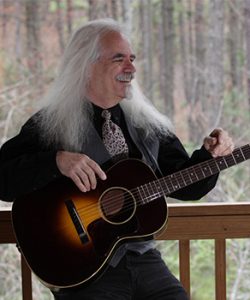 Getting to Know Michael Reno Harrell

We are excited to welcome Michael Reno Harrell to the festival for the first time this year! Coming from the Southern Appalachian Mountains his stories and songs have been described best as “like a breakfast of butter and molasses on a warm biscuit… Southern, easy and sweet.” He was so kind to answer a few questions for us to help us get to know him a bit better prior to his debut at the festival.

The first time that I told a real story, that is, not just an anecdote or a joke was on stage. I had a band and we were working a club in the mountains of Western North Carolina, my ancestral homeland. I had written a song about my grandfather and wanted to tell the audience about the person who had inspired the song. So, in the middle of a music show I told a story about my grandfather and me. All conversation stopped and the late-night revelers sat quietly and listened for what was probably a twelve-minute piece. In that one moment, I realized the power of story.

The first time that I became aware that storytelling was not only a thing, but was something that one could actually do as an accepted way of performance was around 2003. I was on tour playing gigs across Texas. I walked into my hotel room around 2:00 AM and turned on the TV to unwind a bit after the show. I found the local PBS station and was immediately captivated by a little southern woman talking about taking piano lessons as a small girl in someplace called Thomasville, Alabama. It was the great Kathryn Tucker Windham. I was hooked.

I was on a tour doing concerts across Michigan, Illinois and Wisconsin and had a Monday night off. My wife called and asked if I would be interested in doing a ten-minute story at a weekly gathering in Chicago. I said that I would like that. There were to be four other tellers also on the bill. The urban audience of perhaps a hundred and thirty was around seventy percent female and the average age was somewhere around twenty-two. I am not urban and was sixty-five years old at the time. After the show, about thirty of them gathered around and asked questions about my performance. I told them that I told stories for a living and they were amazed to find that such a job description existed. Whether or not this phenomenon that has become what we refer to as professional storytelling and the festivals that present it survive, storytelling will be just fine. It just may not be shared in a tent with lots of folks sitting in folding chairs. But, storytelling on any level draws us closer.

Since I’m no kind of dancer or a DJ, I would have to be in the band. And since I grew up playing bluegrass, folk and country, it would have to be a song that presented an opportunity for a good deal of stomping.

Make sure to check out Michael at this year’s Festival. For more information on Michael’s schedule and the Festival, visit: https://timpfest.org/events/28th-annual-timpanogos-storytelling-festival.