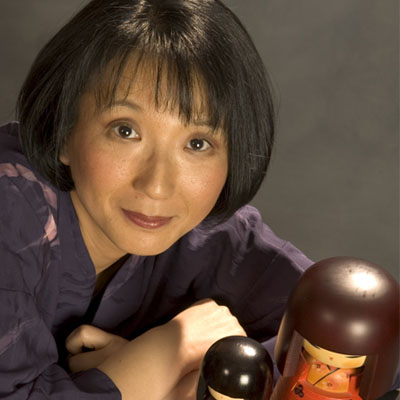 The recipient of the National Storytelling Network’s 2017 Circle of Excellence Award, Motoko has enchanted audiences of every age since 1993. She trained with master mime Tony Montanaro (1927-2002) and renowned Appalachian storyteller Elizabeth Ellis. Motoko’s repertoire includes Asian folktales, Rakugo and Zen tales, ghost stories, mime vignettes, as well as oral memoirs from her childhood in Osaka and her life as an immigrant in the U.S.

As a teaching artist, Motoko has been awarded numerous grants from the Massachusetts Cultural Council and New York State BOCES. Her story CDs have won a Parents’ Choice Silver Honor Award, a Storytelling World Award, and a National Parenting Publications Award (NAPPA). She is the author of A Year in Japan: Folktales, Songs and Art for the Classroom.

2015 saw the premiere of her storytelling concert, “Rakugo: Comical Tales from Japan” (featuring Masayo Ishigure on koto and shamisen) at the University of Massachusetts. In 2016 Motoko made her fourth featured appearance at the prestigious National Storytelling Festival in Jonesborough, Tennessee, where she premiered “RADIANT: Stories from Fukushima,” an original one-woman multimedia performance on Japan’s 2011 nuclear power plant meltdown.

The combination of skill, talent and ability to translate emotion to motion created entertaining and exciting imagery. Motoko puts the audience on an emotional roller coaster. She takes you up, down, upside down and lets you off feeling exhilarated and charged up…Her show was a winner.
Massachusetts Daily COLLEGIAN