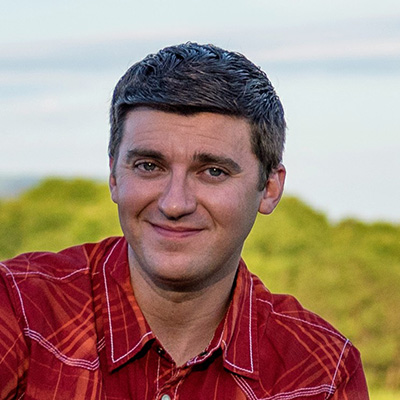 Josh Goforth must have been born musical—he was already playing piano in church at the age of four—but it was an experience he had in the sixth grade that really lit the fuse of his precocious musical career. A performance at Goforth's middle school by Sheila Kay Adams caused him to start thinking about the musical heritage and stories of his native Madison County, NC. Josh was able to listen and learn from local masters like Gordon and Arvil Freeman and Jerry Adams. Goforth is a highly accomplished storyteller and acoustic musician playing close to 20 different instruments.

After high school he went to East Tennessee State University to study music education with a Euphonium concentration, and to be a part of ETSU's famous Bluegrass and Country Music Program. In 2000, he played fiddle for the movie Songcatcher, both onscreen and on the soundtrack. He has toured extensively with a variety of ensembles, including the ETSU Bluegrass band, David Holt, Laura Boosinger, and with several bluegrass bands like Appalachian Trail, the Josh Goforth Trio, the Steep Canyon Rangers and Open Road. Josh has performed in all 50 US states, and all over Europe, Asia, and Australia. In 2000, 2003, and 2005, he was named Fiddler of the Festival at Fiddler's Grove and, after winning the third title, was designated "Master Fiddler"; and retired from that competition. He has performed at the Grand Ole Opry, the Lincoln Center, as well as Carnegie Hall. In 2009, he was nominated for a Grammy for his album with David Holt entitled "Cutting Loose." He currently is on faculty at the Academy for the Arts in Asheville and performs all over the world.